From Samples to Custom Made Planner

From Samples to Custom Made Planner

Thank you Anita and Philofaxy for writing this blog post about the process of deciding on and ordering your VDS Custom Made Planner.

Here is the original post about the samples and about the planner.

Whilst I may admire other people’s Gillios and Van der Speks, I have never purchased one as I feel that I can’t really justify spending that much. Back in 2016, I did order some leather samples from Van der Spek, but never went ahead with an order. I am absolutely not judging anyone else or saying that I don’t think that they’re worth the money, but in the past I know that I wouldn’t have been comfortable with spending that much when a Filofax will do the same job. However, after deciding that I would never buy one, a very kind and generous friend got involved and I then had the funds to buy a custom Van der Spek! I am so grateful for their thoughtfulness and generosity.

Once I had a proper look at the Van der Spek website, I realised that I would need to narrow down my favourites and order some more leather samples. The ones that I ordered back in 2016 were: turchese (6219), turchese (19), black ostrich (235) and Janet Leather burgundy (109). Whilst I still quite like the idea of black ostrich on the outside and a turchese interior, I know that I always come back to a red binder in the end.

Here are the samples I ordered: 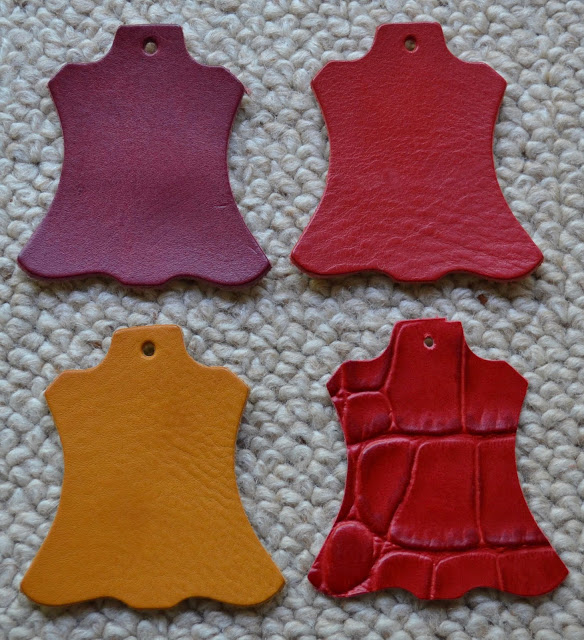 However, I then realised that I had a problem as I liked them all! How to make a decision?
I carried the samples around with me in my bag, scratched them on purpose and started pairing them up with each other to help give me some ideas. For example, I’ve always loved the Ascots, so one choice would’ve been Papavero croco on the outside with Janet Leather red on the inside. Whilst the Papvero croc is lovely, I realised over time that Janet Leather is definitely my favourite, so it was then time to make a decision about what colour to go with.

We have a winner! 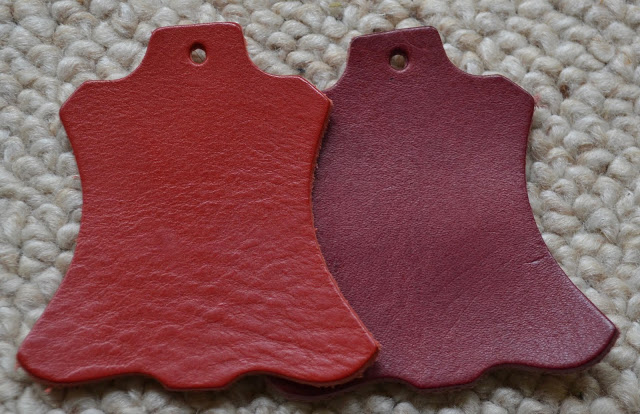 I was going to get matching stitching, but was then inspired to go with contrast as I remembered how much I like it on the crimson Malden and wine Holborn. I also did consider trading up to 30mm rings, but decided against it as I’m pretty good at clearing out old notes, and I don’t want it to be too heavy or take up too much space in my bag.
So, there we have it and I’m quite excited, but still have some time to wait until my order gets here. Once it comes, I will be rehoming my Ascot as I know that owning just the one binder is best for me.
After writing my previous post, my custom standard Van der Spek arrived more quickly than expected and I am SO delighted with it! Petra kindly sent me some photos to include in this post. 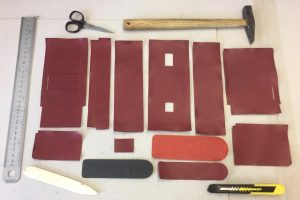 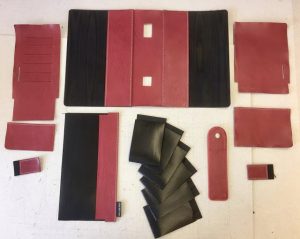 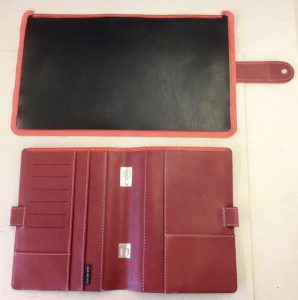 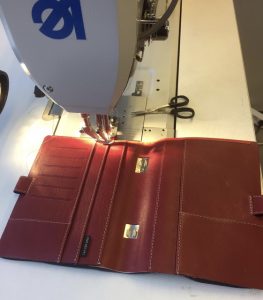 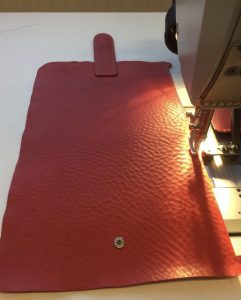 The outside has a wonderfully pebbly texture in the red Janet Leather and I love the contrast with the smoother burgundy inside. It’s funny how much I like the burgundy as I really wasn’t sure at first when I received my leather samples. 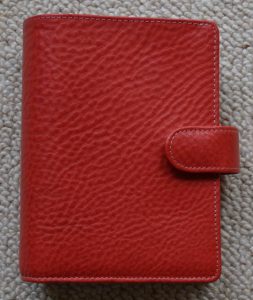 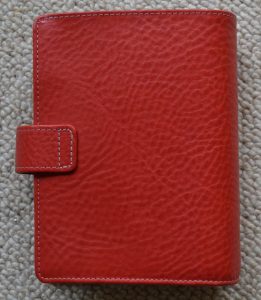 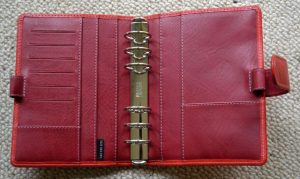 Once I’d completed my order, I did consider asking if I could instead have matching stitching inside and out, instead of the contrasting light grey. I wasn’t sure if it would work, but I am so glad that I didn’t change as I am a little obsessed with it! Maybe that’s a little strange, but the stitching is beautiful and the contrast works well with both colours in my opinion. 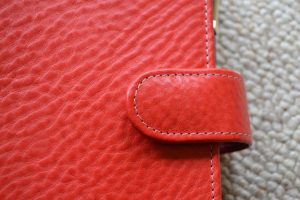 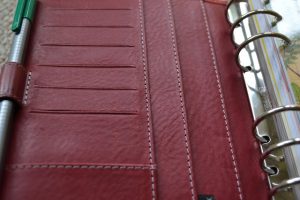 Before I got to the checkout, I had a good think about buying a zipper compartment, but I only really need a zipped pocket when I use my binder as my wallet, which isn’t very often. Aha, I then remembered that I still have my trusty plastic pencil case that I hole punched (7 years old and still going strong). 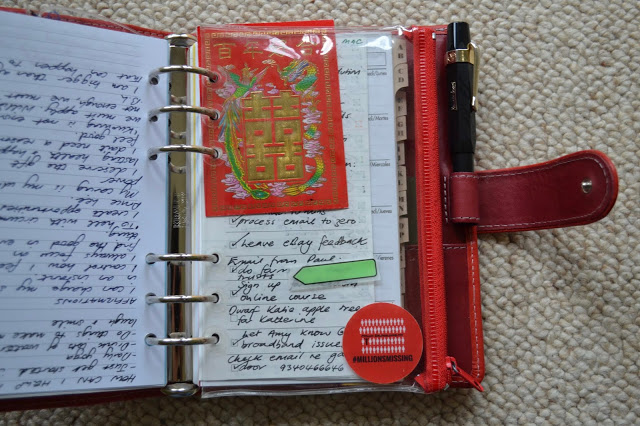 The only thing that I didn’t think about was that the thicker Janet Leather with the big back pocket means that it didn’t initially lie flat, which was a surprise. However, in the short amount of time that I’ve been using it (since 15th August), it has already started to improve and squashing it down a little helps too. 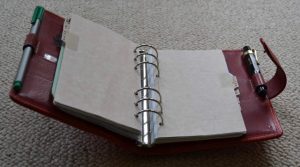 I just removed the contents from my Ascot and plonked them straight in. 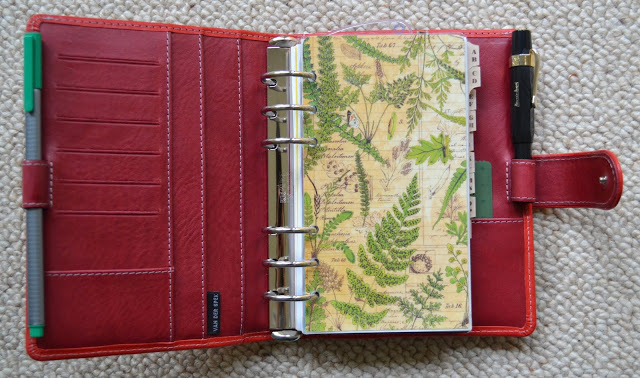 I haven’t started to properly use the pockets yet, but this one at the back is perfect for holding my Hobonichi stencil. 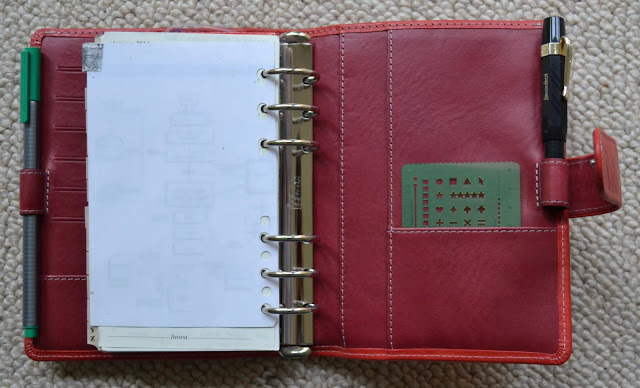 I’ve never owned a personal sized binder with a big back pocket, but I really think that they should all have one as it’s so handy for storing A4 paperwork.

Another consideration for when I was ordering was whether or not I wanted to move up to 30mm rings. In the end, I decided against it as I wasn’t sure how heavy it would make the binder, and if I really need all that extra capacity. I’m glad that I went for 25mm as my binder holds a surprising amount more than my Ascot.

You can see here the difference in ring sizes:
25mm in standard size VdS
23mm in the Ascot 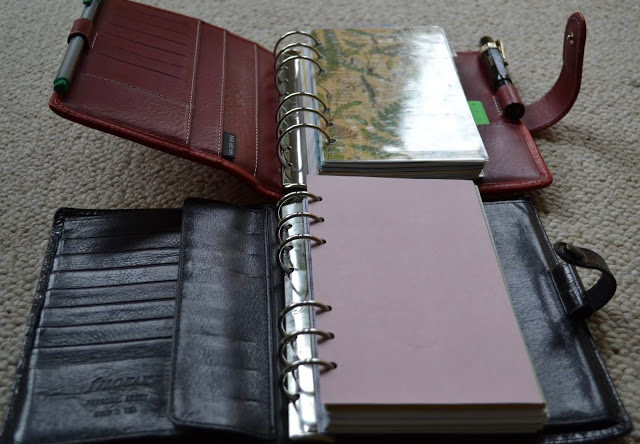 To check the difference in capacity between the two, I filled the Ascot up with paper and then moved this into the VdS. You can definitely see that there is room for quite a bit more in the VdS. 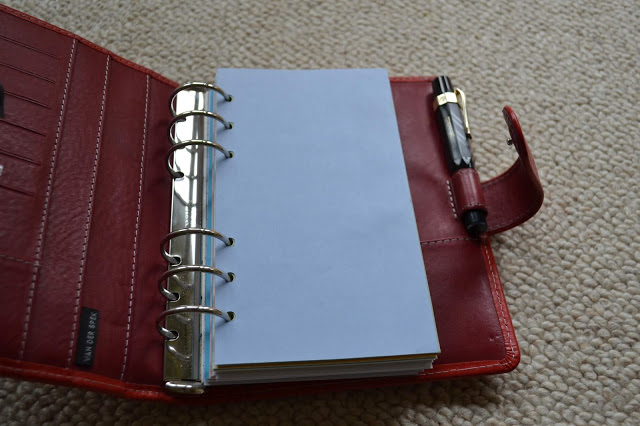 Another comparison that I did was to completely fill both, remove the contents and measure how high the inserts were: – the Ascot had 14mm vs. 27mm in the VdS!

The VdS is slightly larger and wider than the Ascot, but I’m very happy as between the larger ring size and big back pocket, it consequently holds so much more. 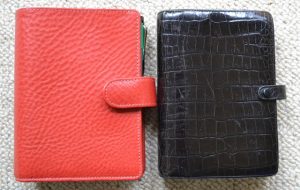 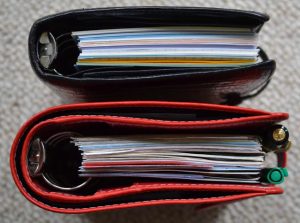 View from the top of VdS 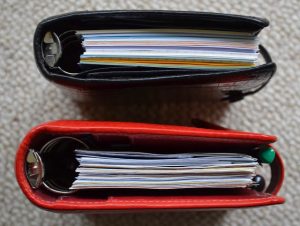 As my overall plan was to get back again to owning one binder, I have now sold the Ascot and it’s currently on its way to a wonderful new home in the US. Ironically, my work colleague then gave me back a mini Kensington that I gifted to her many years ago, so for a short while I was then back up to three binders. Whilst the mini Kensington is lovely, it is also on its way to a new home in the US.

I’ve never named any of my Filofaxes before, but as this binder is such a special one, I started to think about what I would call her. How to choose? Some of the names that I considered were Binky (Death’s horse from Terry Pratchett’s Discworld books), Valentina (Tereshkova, first woman in space) or Yuri (Gagarin, first person in space). However, none of them really stuck. And then a perfect name came to me whilst writing this post… My VdS is a real TARDIS as for its size, it’s much bigger on the inside, like Doctor Who’s time machine. I’m a bit of a Doctor Who fan, so I then remembered an episode that I loved called the Doctor’s Wife (written by Neil Gaiman), where the TARDIS is placed in a human body and the woman’s name is Idris. I also like the actor, Idris Elba, so we have a winner!

This Is A Custom Widget

This Sliding Bar can be switched on or off in theme options, and can take any widget you throw at it or even fill it with your custom HTML Code. Its perfect for grabbing the attention of your viewers. Choose between 1, 2, 3 or 4 columns, set the background color, widget divider color, activate transparency, a top border or fully disable it on desktop and mobile.

This Is A Custom Widget

This Sliding Bar can be switched on or off in theme options, and can take any widget you throw at it or even fill it with your custom HTML Code. Its perfect for grabbing the attention of your viewers. Choose between 1, 2, 3 or 4 columns, set the background color, widget divider color, activate transparency, a top border or fully disable it on desktop and mobile.